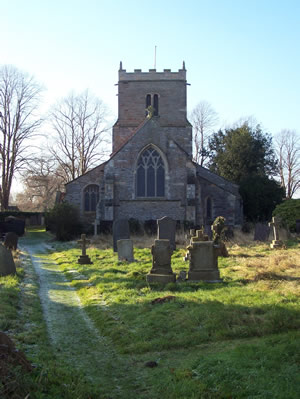 The church is sited just outside the edge of the rural farming village of Screveton. The village has a population of approximately 125. The building is grade 1 listed with a pantile roof and many unusual features amongst which are the C12 – C14 font. There is also a Piscina, a Charles II Royal Arms and 2 misericords, one of which is Victorian. There is also a large alabaster chest tomb containing the remains of Richard Whalley which is sited in the bell tower. There are a number of stained glass windows with a particularly beautiful one above the altar.

The fabric of the building is in excellent condition, considering its age and the roof was replaced in 2008. We hope to be able to put in a kitchenette and toilets in the future. We spend money each year to have the stone work repointed to prevent and further ingress of damp.

There is a pretty graveyard and garden of Remembrance with wild flowers growing amongst the headstones.

Our Quinquennial inspection concluded that the building is in good order with no major problem.