Christian worship has been offered on this site for over 1300 years. Following the erection of a Preaching Cross, the Saxons built a cruciform church with a central tower about 700AD as recorded in the Domesday Book. It was burnt and rebuilt between 800 and 1050AD.

It survived through Norman times and then in the 13th century the church was rebuilt with the help of the Chapter of Rouen Cathedral. The main feature remaining from this time is the chancel. In the 14th century the octagonal pillars, chancel arch, side aisles and south porch were built. 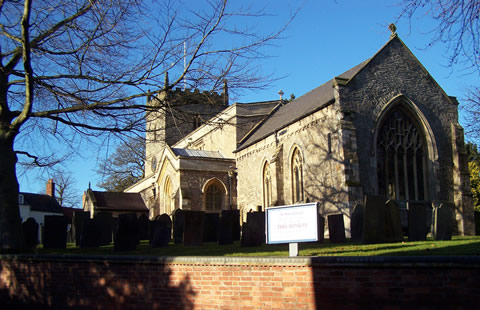 The clerestory windows of the nave and the large east window were added in the 15th century. Of the medieval font there is no trace and it is thought that it was profaned by the Puritan soldiers in the Civil War; replacements after the Restoration of the Monarchy were crude. By the 18th century the fabric of the church had become very dilapidated and the tower was rebuilt in 1778, based on the 13th century design, and the church re-roofed. New windows were put in the chancel in 1862 but all the stained glass is of the 20th century.

History and Heritage of the village
East Bridgford is well known locally as the site of the Roman settlement and fort of Margidunum built in about 47AD. It is thought that the earliest Roman settlement at Margidunum derived its location from a crossing point of the river which probably already existed and that the old road to the river (Streete Way or Bridgford Street) was part of a route from the Belvoir Ridge to the river.

The settlement of East Bridgford was documented in the Domesday Survey of 1086 as Brugeford. Before this time, the site was a fortress from the Bronze Age and was probably a stronghold of the King of Coritoni. At this time the settlement had a church and a priest. The church site dates from about 700 and the building itself from between 950 and 1100.

The shape of the village today derives from its agricultural and political past having evolved from the pattern and nature of land ownership. Four manors are mentioned in 1086. The largest manorial jurisdiction was already divided by the 14th century by inheritance (later Scrope and Magdalen College); another was sold to the notorious Hacker family in 1591.

Village population was static at around 250 between 1086 and 1674. By 1801 it had doubled and by 1861 had doubled again to approximately 1078, falling somewhat in the next century. In 1931 there were 208 houses, today there are 790, the population having doubled since 1960. Despite this rapid growth the village still retains a distinctive character, its landscape, settlement pattern and buildings showing the marks of more than 1000 years of history.

The rural character of the village has changed particularly over the last 30 years as agricultural land within the core of the village has been replaced by housing. These changes have brought with them many different economic and social benefits.

For details of East Bridgford PCC, including its membership, minutes of meetings, and annual accounts and reports click here