St Mary’s Church, listed Grade 1, dates from 1190; the chief glory is the 14th Century chancel in the decorated style with ornate sedilia and windows largely reglazed, as was the clerestory, with plain glass in 2008/9. Unusually the chancel rises higher than the nave. 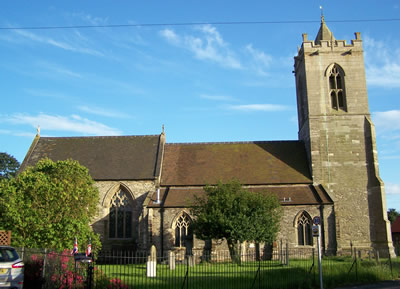 The aisles have windows from about 1850 and in 2008 kitchen and lavatories were installed behind a neo-14th Century restored Victorian screen from a redundant church elsewhere which mirrors the chancel windows. There is good stained glass: a chancel window of 1875 by C E Kempe and an Arts and Crafts tradition aisle window of 1993 by P D Cormack MBE MA FSA. There is a faculty under consideration to remove uncomfortable and surplus pews in order to facilitate space for social events.

History and Heritage of the village
The first traceable settlement, with footings visible from the air, is the Commandant’s Villa (in the paddock behind the Royal Oak) to the Roman Settlement Margidunum on the Fosse. Otherwise the village stems from Saxon times and until the 1950s was chiefly agrarian, as indeed the land outside the village envelope remains. Most of that land, however, is now chiefly farmed by three businesses, two based in the parish and farming land beyond the parish and one based in Screveton. Since the 1950s, with increased car ownership and in common with most of lowland England lying within 15/20 miles of major cities and transport connection, the rural and agrarian heritage has been eroded but is retained visually, if not sociologically.

The noted 17th Century Nottinghamshire historian Dr Robert Thoroton (from whom the county antiquarian society takes its name) lived on the site where the present late 18th/early 19th Century Old Hall Farm now stands. Thoroton is buried at St Mary’s and is commemorated in the church.

The village forms a conservation area that extends almost to Screveton and there are several listed buildings.