The church stands on the escarpment above the River Trent. It is a conspicuous landmark dating from the 12th Century and has been lovingly maintained by succeeding generations. The chancel, nave and porch were rebuilt in 1879. 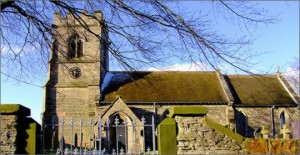 Kneeton Village
Kneeton is a small village of 25 households lying 9 miles south west of Newark-on-Trent and two and a half miles north east of our joint parish of East Bridgford. It is bounded by the A46 to the east and the River Trent to the west.

It has a mixture of dwellings from early 18th Century cottages and 20th Century houses to six post-war modern semi-detached houses and a former school house. All but three of the properties in the village are owned by the Patron, Mr. George Neale and the Neale family trusts.

There are 49 electors in the parish and most people live in comfort and security. Almost all employment is outside the parish but two villagers work on the farm. Children attending school are transported to the Church of England Primary School in East Bridgford (two and a half miles) or the Secondary School in Bingham (5 miles).

For details of Kneeton PCC, including its membership APCM minutes click here.